It seems people still don’t understand there’s a difference between the Camon 11 and the Camon 11 Pro. The Camon 11 is Ksh. 15,000 while the Camon 11 Pro is Ksh. 25,000. That’s a Ksh. 10,000 difference. But this difference is only in RAM, Storage, and Cameras. Everything else is pretty much the same. And you know what that means? Well… that the TECNO Camon 11 is the best designed affordable smartphone out there. Because the same body design will be sold for 25k with better specs and be called PRO.

TECNO must be in some sort of dilemma right now with their Camon devices, I imagine. The predecessor to the Camon 11, the Camon X, is still a tad more expensive in some stores – Ksh. 16,500 – while offering just 16GB of internal storage. What happens to those units? Prices should fall? Anyway, this post is about checking out the new Camon 11 which I unboxed yesterday.

If you’re not aware of the Camon 11 Specs, here they are down below.

The experience is the same unboxing this Camon as it was with the Camon X. I noticed the earphone design has changed. I hope they sound much better. There’s a normal charger, so no fast charging, a micro-USB cable, an amazing case, and paperwork.

Check out this video where I unboxed the phone, and walked around with it and shared my thoughts: 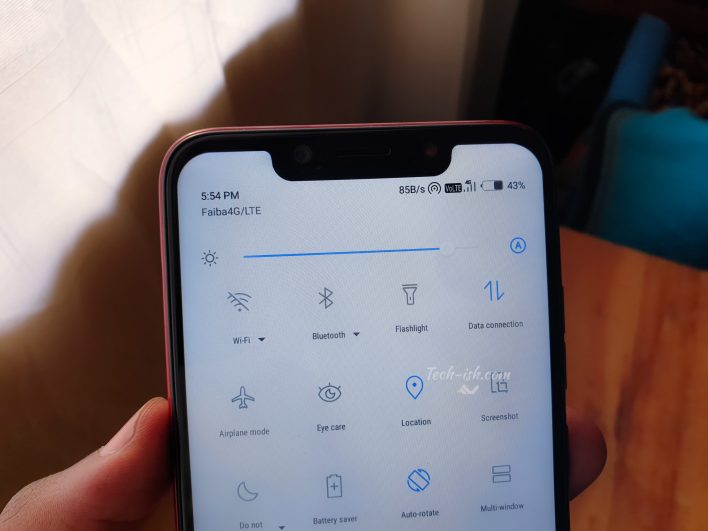 This is the second biggest thing for me with this phone. I just plugged in my SIM card and it picked both data and voice settings. I didn’t have to key in any APNs to get started. I can make calls using the Faiba4G network, send SMS and enjoy the internet. Faiba and TECNO have a partnership that will get you 25GB of data when you get either the Camon 11 and Camon 11 Pro. I still don’t know how to activate that because who doesn’t want 25GB free? Will update this once Faiba gets back.

The renders made this phone look quite bad. From the notch, to the chin. They were awful. But in person this phone – most especially the Bordeaux Red that I have – looks amazing! And if you’ve watched the video above you can really see how good it looks.

The back is plastic, but it doesn’t feel like it. It is shiny, and reflects light in a gorgeous way. Like I said in paragraph one, this is the best designed affordable phone out here. I don’t think 15k can get you something this good looking anywhere.

Also, it is very very very light. Watch the video and see me exclaiming at its weight. How did they make such a light phone? It is even noticeably lighter than even the Infinix Hot S3X which I thought quite light.

I am still annoyed by the fact that the Camon 11 Pro will have the same 720p panel as the Camon 11. Even though I agree that for 15k, the Camon 11’s 720p panel is acceptable. By using the word acceptable, I am not in any way saying this display is bad. On the contrary, it is a good display. For real. But I don’t want you to take my word for it, go check it out in a store when you can.

The Camon 11 Pro should have had a 1080p display at least. Because 720p at 25k isn’t a good thing at all. But at 15k, the Camon 11’s display is good, and I am not complaining considering *almost every budget phone at this price range currently has a 720p display.

The big 3750mAh battery managed to last me most of my tasks yesterday. I unboxed it when battery was about 64% I believe and I installed stuff, walked around shooting pictures and videos and well by 10pm it was about 35%. This isn’t like a full battery test, but it looks to be promising. Remember, there’s no fast charging.

I know the highlight of Camon devices is always the cameras, more so the selfie camera. I feel like with the Camon 11, there’s NOTHING so out-of-this-world to write home about. They are good cameras – both front and back. Check the video above to see samples of both pictures and videos I’ve taken with the phone. And share your thoughts with me. I was amazed that video quality from the back camera is really good, there’s no jumping in focus, or dramatic exposure changes.

The selfie camera is okay. I hate beauty mode, and I don’t know why companies insist on having it as a feature. Shooting video with the selfie camera also looks quite good, see in video above. I can say quite early, you can use this phone for vlogging especially if you’re starting out, on a budget and need something basic.

What I dislike or could be better?

I hate TECNO’s skin on top of Android. It keeps getting bad. And this time round there’s a lot of bloatware. From Asphalt games, to a new weird keyboard, to HiOS launcher sending News notifications. I hate it.

I have uninstalled all the unnecessary apps TECNO has bundled with the phone, and disabled the ones I can’t remove. I have also blocked HiOS launcher from sending notifications.

I’ve gone ahead and installed CPL Launcher. Changing your launcher is a process now with HiOS 4.1. Which is annoying! You have to go to Settings –> Apps –> Launcher —> Home –> Change Home App to your preferred launcher. Why is TECNO doing this?

But after changing the launcher and uninstalling bloatware, you get a clean experience.

TECNO has really talked about AI being a major thing with the Camon 11 and Camon 11 Pro. But there’s nothing much AI is doing here. On other phones with AI cameras, you’ll see the camera recognise a plant, a face, an animal. Here the camera just says AI. What does that mean?

I can not as yet tell if there’s a difference between AI shots and normal shots. There’s no scene recognition, the HDR though good is just as normal as any camera. So yeah, the push into saying AI this and that with these device makes no sense. Unless there’s something coming that we are yet to see.

So yeah, those are my first thoughts almost 24hrs later with the phone. I will have a camera review soon – there will be no beauty mode tests trust me. And then later on a full review focusing on performance and battery life. Tell me what you want to know.