I didn’t go to the chat with Isaac Muthui, founder and CEO Nuru Inc. knowing much about Nurucoin apart from having read their Whitepaper and seeing their adverts on social media. Being one who’s pretty new into cryptocurrencies, my only focus has been on investing in some cool coin and making money when it becomes valuable. I mean people have done it, why shouldn’t I?

From the Nurucoin Whitepaper, they present some agreeably good solutions to the bad situation that’s Intra-African trade. Things that could probably work. So I went to have a chat with the man behind the idea to get the bigger picture about his venture and what he envisions for Nurucoin in the coming days post their Initial Coin Offer  (ICO) that starts in February.

It is only after the chat, when I was researching the company for this post, that I learnt of  a couple of odd things about Nurucoin. Some things he had mentioned himself, and somethings that I picked up from the internet.

I believe such odd things could be potential red flags as to the legitimacy of a ‘Startup’ that’s looking to raise $100 Million by selling a billion tokens at Ksh. 10 each.

The money will be used for Blazebay,com, a Business to Business (and business to customer) Intra-African trade platform. It will also be used to build a crypo Operating System to aid in the making of Point of Sale systems that will accept Nurucoins. Nuru Inc will also be looking to build a Pan-African blockchain that will hopefully in future aid ICOs in Africa.

As you can see the plan is solid. And it seems like quite a good thing anyone would want to invest in. People have become millionaires from ICOs, and such a good plan as has been presented by Nuru Inc may sound exciting factoring in the point that it is being done by Kenyans in Kenya.

But remember the odd things I mentioned.

Here are some odd things with Nurucoin:

These oddities made me question Nuru Inc and Isaac’s intentions. I felt there was no need to share the video or even write this article. If something goes wrong after the ICO people may blame such articles as being the catalysts to a lie.

But then again, putting all this questions in the open would be a good thing for people who may want to invest in the ICO. Raising concerns like this may fuel a conversation and end all speculation.

You can read the rest of the post before watching this video:

Say I have a cool idea but don’t have the money to make it happen. I can make a “cryptocurrency”  say Techishcoins  (tokens) and then ask you to buy the “cryptocurrency” from me using either Bitcoins, Ether, or Dollars. In this way, I’ll be giving you my tokens and you’ll be giving me your money.

I can thus use the money you gave me to build my idea into something realistic. Which in turn increases the value of the tokens you bought from me. You on the other hand, can either hold on to the tokens waiting for them to gain more value so as to sell them and make a profit, or use them in places where my partnership with other groups may allow you to use the tokens as a form of exchange for good or services. Something like that.

During an ICO a token is very cheap and in the future it can gain in value and make you more money. For example Nurucoin will be worth Ksh. 10 during the ICO. But Isaac envisions a future where it will be worth more than Ksh. 100,000. So if you buy Nurucoins worth say Ksh. 10,000 that will be 1000 coins. In future if a coin costs Ksh. 100,000 and you sell all of them, you’ll have Ksh. 1 Million.

Is Nuru Inc’s idea something that may create value?

Having a Pan African platform for trade is something I feel that may be of value. A company in Kenya can easily trade with one in Nigeria and pay via a cryptocurrency in a sort of transparent way that also ensures goods are received and are of quality. Exchanging Nurucoins will help especially by reducing transaction costs, and doing away with the volatility of normal currency exchanges. It will also do away with the middlemen.

Adoption however may prove a challenge. If Nurucoin successfully raises funds for, and implements this idea, and it becomes a big thing, then the tokens may increase in value as people begin to use them for trade. But eCommerce has had issues in Africa, and I am not sure whether or not Blazebay can manage to make businesses trade with each other, and with customers, over the internet using Nurucoins. 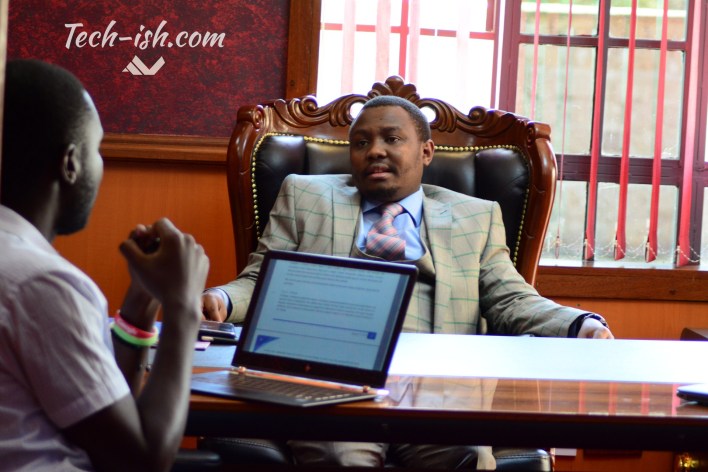 Nuru Inc is also looking to build a Pan-African Blockchain.

WHAT’S BLOCKCHAIN? – YOU KNOW THE WAY GOOGLE DOCS ALLOWS YOU AND OTHERS TO VIEW ONE DOCUMENT AT THE SAME TIME AND SEE ALL EDITS TO IT FROM AT THE SAME TIME? THAT’S KIND OF BLOCKCHAIN: A PUBLICLY SHARED DATABASE THAT’S HOSTED ALL OVER THE INTERNET AND IS ACCESSIBLE TO EVERYONE. THIS TECHNOLOGY IS REALLY GOOD FOR ALMOST ALL SECTORS OF LIFE; HEALTH. LANDS, LAW ETC. THANKS SATOSHI.

Isaac said it will even help with other ICOs in Africa.Is this something viable? I don’t think I even understand what this means. There are many companies building different blockchain solutions for different sectors in Africa. Will they compete with such? What will the Pan African blockchain be used for?

Is this something that is realistic or does it just sound good when said? Someone should kindly explain this.

Where will Nurucoin be accepted?

Currently this is limited to Blazebay.com. But as I said, this isn’t assured 100%.

As I talked to Isaac, he said they’ll be talking to merchants to accept the coin. This sounded to me like a plan for the future, not something that’s assured. Which could mean a scenario where you have a lot of worthless coins, meaning lost money. What happens if the merchants don’t accept the coins.

There’s also the plan for having Point of Sale systems that will accept Nurucoin. Which could mean in future you would be able to buy from a supermarket and check out with Nurucoins. This sounds pretty good. But there’s that possibility that this may all be empty talk with no actual plans owing from the fact that during our conversation Isaac said NuruPay was a completely different platform.

If Nurucoin isn’t accepted anywhere, then you’ll potentially be wasting your money.

Some good things with Nurucoin

There’ve been ICOs that people have run without a proper roadmap or even a prototype. There have been ICOs without a board of people behind the idea. Nurucoin looks better promising if someone chooses to ignore the redflags.

Should you buy during the ICO?

If you believe in the idea and trust them, go ahead and buy. The pre-sale is 40% discounted and opens 30th January.

If you have questions about everything and are not sure whether or not you should buy, wait up and see how the ICO unfolds. Thereafter get the coins if things look good.

Would love if Nuru Inc answers all the questions I’ve raised in this post. I would also love to know what you think about Nurucoin. Are there things I’ve left out that you feel should be included? If you have questions, there’s a comments section.

If I’ve made a mistake with any statement or explanation on this post, kindly feel free to contact me and explain.