If this starts sounding like a rant somewhere while you read on, then I am sorry for asking a little more from this device. In my unboxing post, I said this phone was made as a company statement and as such, the company was free to charge whatsoever they wanted to for the device. Someone then asked me if that meant that the phone was just a gimmick. And I laughed it off. It wasn’t what I wanted to pass across. But maybe that’s exactly what the device is.

The OPPO Find X is an $1000 phone. At that price point you get this futuristic-looking, excellently designed, all glass beauty. It is looks so good. And when you have it on your hand with any of the other phones we’ve seen in 2018, nothing comes close. It makes even my favourite device so far (the S9+) look dated. The curves, the sides, the accents, the feel, and the huge almost completely bezel-less display. Then you launch the camera and see it sliding from within the phone, and everyone gets excited whether they love technology or not. And I feel like saying early on that that’s where the amazement should end. Or rather, that’s the only premium you’re paying for for this device. 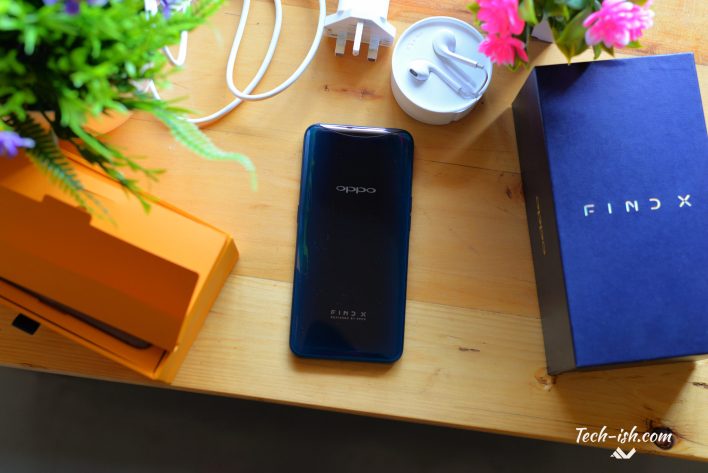 Everyone gets excited about a new device. Especially if it is talked about everywhere. And more so if it is a very expensive piece of technology. Whenever I get a new phone, like you, I want to test out everything. I want to install apps, take pictures, set up things and much more. First day I got the Find X for review, I realised I was getting incredible battery life. It had been over 5 hrs of continuous use on WiFi and I still had slightly over 50% remaining. So I wanted to share on social media the screen-on-time I was getting, to give people an idea on the 3750mAh battery. I go to Settings -> Battery, and to my amazement, OPPO’s ColorOS doesn’t show screen-on-time!

A week or so later, I was watching UrAvgConsumer on YouTube doing his signature ‘A Real Day in the Life’. I laughed when he wanted to share his screen-on-time after hanging out with the device the whole day. I laughed when he said you cannot change the launcher on your phone (of course you can, it is just quite the process). I laughed when he was shocked that changing the wallpaper on your OPPO involves a long process.

These may seem like minor things. I mean, I have no problem having to go to settings to change the wallpaper, or the launcher. I have no problem having to use an app on Play Store (I couldn’t find an accurate one) to see what screen-on-time I am getting. But add that to other things that OPPO continuously omits, and did so too on this device, and you’re getting an experience where you honestly cannot justify the $1000 price tag. 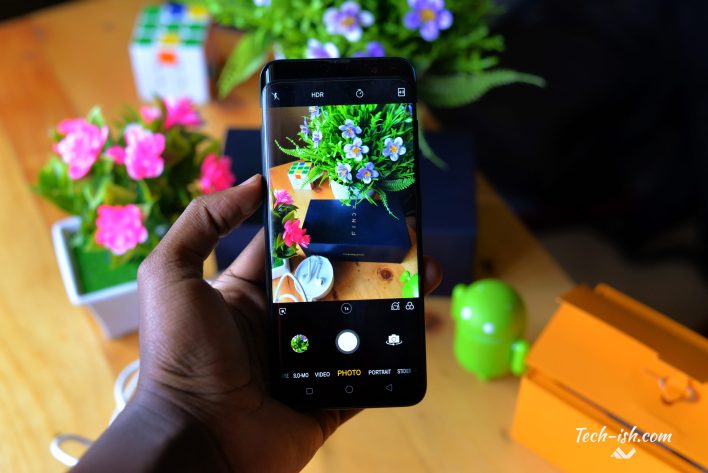 To be fair, there’s a couple of good, almost incredible things the OPPO Find X, and OPPO’s ColorOS in general do so well. For example the cameras on the Find X are good both front and back. Video stabilisation is good. Image quality is good. HDR mode is aggressive at times, but incredible in many shots. I cannot outright say this camera is worse than the one on the Galaxy S9+. Neither can I say it is better. In some instances I prefered the Find X. Because it bumps up saturation in certain cases producing a very appealing image.

The thing that stood out so clearly for me with the camera was Artificial Intelligence. I point it at food, it knows it is food. I take a pic indoors, it switches to indoor mode. It recognised so many different modes, and adjusted the settings to best suit those conditions. And it being the very first time I was interacting with such a feature, I was so excited. I especially loved taking night shots with this camera. So if you are concerned about the camera on the Find X, know you’re getting a good camera.

But there’s a camera mechanism to this phone. As you know it slides out from within the body of the device. I had no fears about dirt, dust, water or any foreign tiny materials affecting it. And I experienced no issues with that. But I experienced a totally unexpected issue: in many instances, the motor forgot to retract. So there were many instances where I had exited the camera app, but the cameras hadn’t retracted and I had to push them back manually. 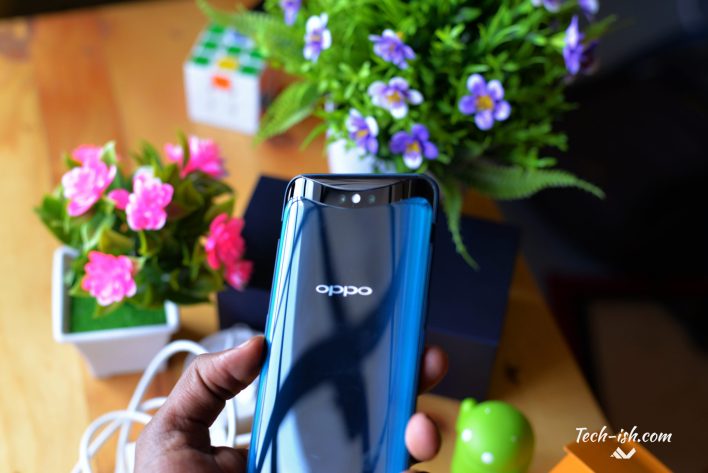 The opposite, where the camera refused to slide out when launching, or unlocking the device never happened. Which is a good thing because that would be a disaster.

For the first time in my life with smartphones, I realised just how many times my camera is accessed by different apps.

Another good thing with the phone happens to be something built in to ColorOS: privacy. Whenever entering a password, pin, or what should be considered private information, the keyboard would change to OPPO’s secure keyboard. I found that handy and a feature that most devices should have in the wake of data collecting keyboards like mkey.

With such a handy feature, I find it weird how ColorOS was imagined. Yeah, we will make changing your launcher and wallpaper a process, but add in a secure keyboard. We will also leave out certain basic features.

But my main complain about this device isn’t the features OPPO left out, or the unreasonable price. It is the general performance of the device. I’ve said I have had no problems with the camera. I have said the battery life is excellent, although I have no ways of showing you that. I have said the build quality is great, and that it is beautiful. However, try using the device for a whole day. 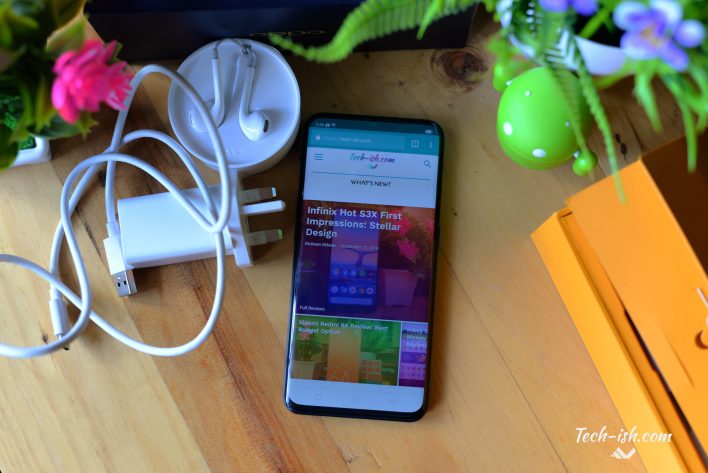 The first time it happened, I thought maybe there was a problem with the Twitter App. The phone completely froze. Nothing was responding anymore. I couldn’t scroll my Twitter feed. I couldn’t leave the app. I couldn’t restart the phone by holding down the power button. I waited. Nothing. 20 mins later, nothing had changed. So I decided to try a combination of buttons. And holding down the Volume Up plus Power Button for a couple of seconds restarted the phone.

This has happened many times and it is always while using either Twitter or Instagram. Just those two apps. And it is so random. I can’t point out what particular action triggers it. The only solution so far has been holding down those two buttons to restart. It’ll happen sometimes even thrice in a day.

I tried gaming on the phone. Asphalt 9 is the new craze. I had no issues whatsoever. The phone warmed up a bit, but didn’t get hot. I noticed no problem with that. This isn’t proof enough that this phone will handle all games well without heating, or without stutters. Also, remember that OPPO has even been caught cheating in benchmarks. 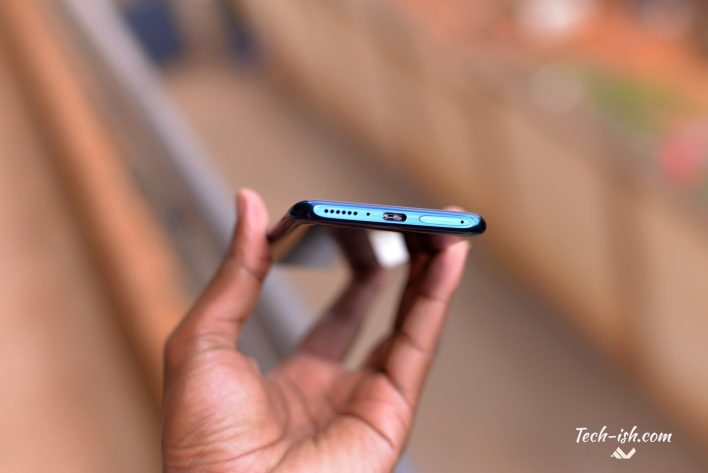 The single speaker at the bottom is really loud, clear and good for music. But for me it was a big stepback owing to the fact that the S9+ has stereo speakers, that sounded way better both when listening to music, watching videos, or gaming. OPPO could have used the earpiece as a front speaker if they wanted to, and that would have made the sound experience much better. But all in all, the speaker is quite good, just don’t block it with your hand. And that can prove to be difficult when you remember that this phone is the most slippery piece of hardware I’ve ever used.

Place it on a table, it’ll slide off. Place it on a couch it’ll be moving. Hold it in your hands absentmindedly, it’ll fall. It’s slippery nature, the fact that is made of glass, plus that price tag, will hold you back from doing so many things you’d want to do with the phone. Want to take a picture in public? Make sure no one bumps you accidentally or the phone will slip and fall. Yes the Galaxy S9+ is also made of glass, but the finishes are different. The Find X has more curves, and I believe it is the curves that make it this slippery. This is a phone you’ll handle with more care than any other phone in your life. Also, I didn’t have a case, so that’s why I had a hard time. Plus remembering that the S9+ is waterproof, and this one cannot be, makes you even more cautious bringing the device to certain areas, even your own kitchen.

What I noticed that also didn’t impress me was that the display had some colour shifts in different angles. Whites looked a bit warmer in certain angles. I know that causes an uproar for many people, but it wasn’t an issue for me as I constantly view the display directly.

A few days ago, OPPO introduced the first 10GB RAM smartphone by adding a variant of the Find X that will now ship with 10GB RAM. We all know nothing will change in terms of performance. About 4GB RAM or 6GB RAM is enough for a good Android experience with a good processor. Even 8GB is overkill. But having 10GB is okay, as long as OPPO fixes bugs and ensures a smoother experience than what I was getting.

Now going back to the pricing. At $1000, you can get the new iPhone Xs. You can also get the Galaxy Note 9 (which many agree is the best all round smartphone). And either of these offer quite more than the OPPO Find X.

Remember, at the same price, you can get about 3 Pocophones with the same processing power.

I don’t think OPPO made the Find X as a device they wanted to sell to many people. I want to believe very few have walked to a store and paid $1000 for this device. So I will go back to the thing I said in my unboxing, this is a company statement. OPPO made this phone to build their brand. It would be a waste to pay $1000 for this phone. There’s bugs. ColorOS holds back a lot, plus will the phone even receive Android 9? There’s way better phones you can get for that amount of money. Unless all you want is that futuristic vibe.

If OPPO is seriously making this phone for the consumers, then wait for version 2 of the Find X, if it ever comes. Because hopefully, that version will offer more value for money.